Ecology is the study of home. The best theories tell us to minimize human threats, conserve pristine habitats, restore broken ones, and work to save endangered species and novel ecological resources threatened with extinction. ​

Personally, I did most of my environmental work through my ecological  consulting company: Tidal Influence, LLC.  In December 2014, I sold that company to be able to devote more of my time to learning about and exploring more conservation activities outside of my expertise. Since selling the company, I've been exploring other project. Here is a portfolio sharing some of it:

Terrific Endangered Species websites and blogs that I follow:

I used to find it so simple but after a decade as a practitioner studying conservation, I find that it is difficult to understand extinction, biodiversity and how humans interact with that world. For some reasons there are answers that elude us and the system controlling the global interaction of ecosystems is not intuitive to us yet. The sites that I regularly visit below have helped me understand these questions and topics.

I've been searching for a long time for a theory that explains the interactions between humans and nature. Since August 2014 I feel like I have been on a giant Easter Egg hunt, picking up random pieces of information here and there. It started with a lecture from Jesse Ausubel and the founders of The Breakthrough Institute. The next thing that really shifted my thought was a talk from Peter Kareiva of The Nature Conservancy. Then Dr. Sanjayan released an amazing documentary series called Earth: A New Wild. And, finally, in the summer of 2015 I read Tim Merton's books and became convinced that there is an exciting way to not separate humans and nature but see them rather as inhabiting the same place; the Mesh, as Merton calls it. But I came across a theory to explain all of these thoughts: Socio-Ecological Systems Theory (SES). It works well to conceptualize the various thought processes involved. Before I go into it more, the following talk by Dan Barber explains SES theory perfectly:
The wikipedia explanation of SES is pretty comprehensive and I am looking forward to exploring more theorists' work: Socio-Ecological System Theory. In the meantime, some of the particulars of Complexity Theory, Nonlinearity, Emergence, and Resilience and how they relate to Adaptive Governance and Sustainable Development are what I am drawn to.

As I understand it, SES is a paradigmatic shift in managing natural resources in concert with human needs. Beyond just ensuring both proceed harmoniously, the two interact and benefit the other in concert with each other. Much like Veta La Palma in Dan Barber's talk above, SES is making sure the wetlands flourish while we extract delicious fish, sustainably and resiliently, from them.

Some of the questions I have are:Considering that I just found the vocabulary to explain this concept, this phenomenon, this new paradigm of understanding land management, I don't know the answers to these questions. I'm excited to find out though.

In Summer 2015, my brother and I launched a new project. Titled after the genus name of the California Brown Pelican that was removed from the endangered species list in 2009, Pelecanus is podcast and AM radio show focusing on the highlights of conservation, the positive impacts of conservation professionals, and the real people who do this critical work. You can listen to Pelecanus on AM1610 in San Diego, find us on Facebook and Instagram at Pelecanus Radio, search for our podcast on itunes or any podcast search, or go to our website: Pelecanus.org

Below is a presentation discussing the importance of biodiversity globally and the role that California and non-profits play in promoting biodiversity.

When I was working on a habitat assessment report back in 2011 and documenting how many birds and other animals we had , it occurred to me that I had very little to reference that to. How many bird species are there in the world? How many snake species exist in California? How many marine mammals are there right off the shore and how many of all them are protected under the Endangered Species Act? I didn't know and I thought it would be great to put that in the report I was writing. But I found it way too difficult to pull those numbers together. So, after some starts and stops and losing and gaining focus since then, I got pretty far after finding NatureServe. The image below has my first compiled draft of this work but it is woefully inadequate. I still need to fill out many more cells, explain some of the information I do have, and cite everything. But, in the meantime, here is what I have pulled together for biodiversity: 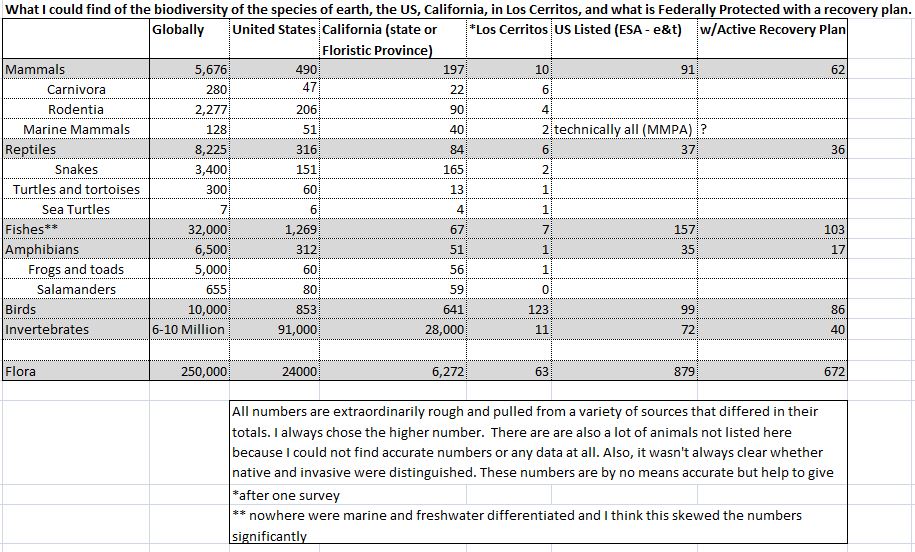 Here is a professional portfolio from my previous company: