This site is about Praxis and how to study and live that philosophy.

So what is Praxis and how do I Practice it?
Wikipedia has a decent overview of what Praxis is but I get my own personal inspiration and definition of from Jean Paul Sartre's preface to Frantz Fanon's Wretched of the Earth: "the only true culture is that of the revolution; that is to say, it is constantly in the making." And: "when one day our human kind becomes full-grown, it will not define itself as the sum total of the whole world's inhabitants, but as the infinite unity of their mutual needs." Fanon's books (WotE and Black Skin, White Masks) are fierce words inciting rage and indignation. He specifically unveils the travesties of the black struggle, of the colonial struggle in the mid 1900's but I find power in his words universally. His works share the 'against exploitation' ethic that Camus spends a book-length essay describing in The Rebel that can be applied to any entity that has been deprived of its power and ability to exist. Fanon advocates violence for his epitome of praxis whereas Hannah Arrendt says that violence is the definition of powerlessness. I personally see a place for violence but regard much higher the true Rebel spirit as the courage to work for betterment without violence. Aime Cesaire's fantastic poem To Africa exemplifies my personal thought with "...pound peasant pound..pound the soil...pound with anger." Sometimes our anger and seething tension when faced with injustice is overwhelming but I see strength in those emotions. Most violence is reactionary under those conditions but if the chaos within can be channeled toward remedying the injustice and against the exploitation than an eloquent expression of thought and theory can work toward building a source of powerful good that can destroy any negative source. Exploitation is death; it is the death of agency, it is the death of all things that are and could be for the selfish purposes of the exploiter. Life is authentic expression; be it expression of self or expression of the earth manifested as a species or habitat. When we fight against exploitation we are fighting for life and when we carry this ethic in our actions we exhibit Praxis. So, I encourage all of us to Practice Praxis.

I set this this site up to discuss the ways to engage with beauty and reverence, to work on meaningful projects and to become a powerful self-actualized individual by embodying this philosophy. My name is Taylor and I don't want to go much into my own personal bio but I will include an interview for the CSULB Comparative Literature Department Alumni page to give context for this site (click on the photo to go to the link): 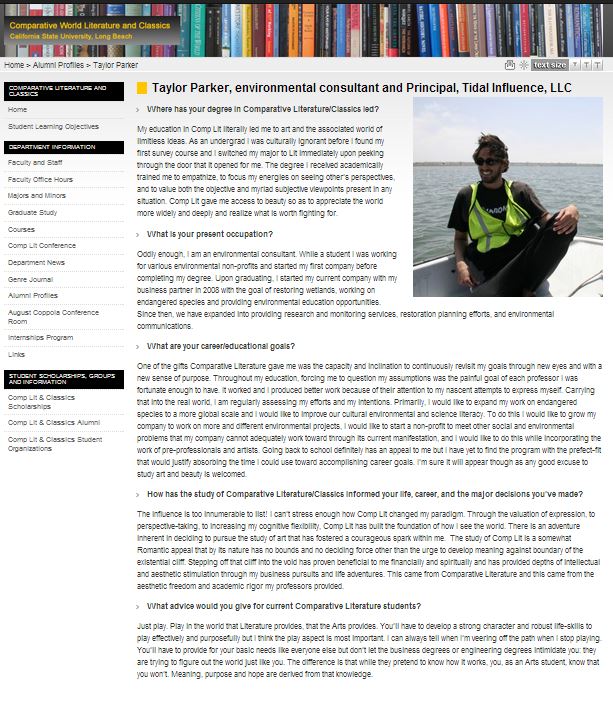