SIP is the Self Intelligence Project. I developed this to understand myself better.

Three years ago, I was the most depressed I had ever been. I had been working for myself for 5 years but that was all I did. I was working 12-16 hours a day for 5-7 days a week for at least a couple years. The only vacations I took were to go on work trips or go camping to get away from everything. I was always saying yes to every client, potential client, employee, friend, and whomever. At the same time, my company was struggling and my unemployed brother moved in with me after having to leave the Peace Corps. I had no car. I was in 70k of student loan and IRS debt and I was living month-to-month barely. I was 30 pounds heavier than I am now, and after being a morbidly obese kid (I weighed 260 pounds when I was 16 and lost 100 pounds by 17 – very unhealthily I might add), gaining weight after I had kept it off for 10 years affected me greatly. I also hadn’t been in a serious relationship for at least 5 years and was ending my workdays drinking progressively more and finding my way to the local bars to pick fights, drink drinks and hit on girls – it was my only outlet. When I did have downtime, I slept and when I couldn’t sleep, I read. That literally was the extent of my life: work, drink, sleep and read. I was, to put it lightly, stressed out.

I had to figure out my problem, I had to figure out the thing that affected me on June 6 2011. I realized I didn’t know myself or what I wanted. I didn’t know who I was, what I valued or what I enjoyed. I didn’t know what was making me feel guilty and what made me doubt myself. At that point, project management was my only skill and I decided to apply that skill to my life. Creating a Project out of my life, out of my Self was needed to have that objective viewpoint on which to evaluate successes and failures. I created the Self Intelligence Project (SIP) and the end goal and rules I developed have guided me.

In all fairness, my work is pretty phenomenal and restoring wetland habitats and conserving endangered species with the local community is a terrific thing and the ‘good’ feeling I had after completing good projects did much to carry me on. But, that in itself is not enough and it all came to a breaking point in June three years ago. I keep bringing that date up because it was pivotal. My brother was gone that weekend and I had a rare moment of peace in my apartment and I was about to pick up a book to read and I just sat down and started crying uncontrollably. I was at a complete loss about what I was doing in my life, how it had gotten to that point and I had no idea whatsoever how to not be in that situation anymore. I didn’t even know what the problem was – I just knew I hated myself and my life. I was very low and was thinking very dark thoughts. I gave myself one year to fix it, I promised myself that if I didn’t fix the problem that I couldn’t define at that point then I would ‘disappear’ (I didn’t know what ‘disappear’ meant but that was the word I used).

Fast forward to exactly three years later (June 6 was my ‘anniversary’ and that was coincidentally when we talked) and my life has changed dramatically and I have so much to be grateful for and so much to appreciate. A brief summary: I have paid off 70k in debt, built almost 40k in savings, am the most physically fit I have ever been, rock-climbing, volunteering at the Museum of Latin American Art, going to the LA Galaxy and LB Symphony, taking classes at the Aquarium or CSULB, running races, I purchased my truck, I am hanging out with friends more and doing weird crazy things (skeet shooting, hunting, sailing, etc), and recently found an amazing woman. There is plenty more but the important thing for me is that I found worth in my life because I created a life worth living. It was very difficult and I doubted myself a lot but I now know how to protect myself and what is important to me, I see what is important in life and what I can contribute, what I can give, and how I can engage with people uniquely.
Here were my original goals:

Here are the two ‘rules’ and ‘reminders’ to guide me, or what I called Aphorisms:


It took me three months but after reflecting at least 5 hours every week, I figured out that I had three big problems in life (I call these the Big 3): my relationship to Money (expenditures, debt, how I viewed money), my Body (eating, exercise, and general health), and to what I called Expression (my values and who I was). I have continued to spend each Friday Night for the past three years reflecting for at least 2 hours (doing so on a Friday evening was an intentional decision: it kept me out of trouble and also allowed me to reflect on the week while it was fresh).

Here’s the way the progress has occurred over the past 2.5 years (Each step broke itself out into a 6-month process – the ‘M’ stands for Maslow Hierarchy of Needs (in the graphics below). Also, each step presented itself, I didn’t set it up originally but only reflected on what I had worked on after the 6 months):

I gave myself three years. Three years to figure out who I am, what my life is about, and what I enjoy. To do that I knew I needed a plan and I had to set myself up to figure it out. Here is the original plan and below is where I am now and some of the things I've learned through the process. 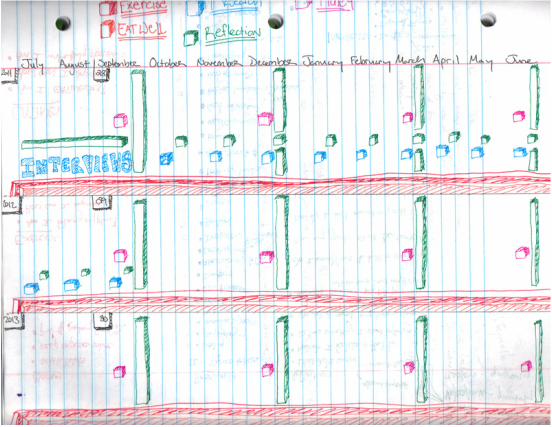 Every quarter, at the beginning of each season, I spend the weekend and go over the last three months. I attempt to review objectively my actions and assess my energies according to the goals I set out in the previous reflection. This way I can measure my actions and push myself closer to well-defined goals.

Graphics to exhibit what I've learned

Through this process I realized I needed to re-create my neurochemistry and rewire my brain.

I don't know what to call the list below. "Accomplishments" isn't the correct word. Neither is "Self-Actualization."